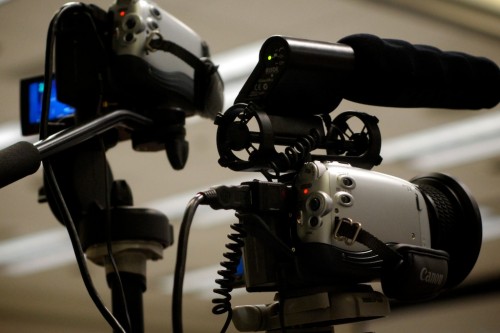 I mentioned a little while ago that I would do a follow up post on how I handled all of the streaming during WordCamp Utah. Basically, here is the breakdown…

I used two, Canon HV30 video cameras. These were tied into two of my computers, an Apple MacBook Pro, and an Apple iMac.

I ran some microphones into an MultiMix 8 Firewire Mixer. This gave me an eight channel mixer that I could run some bump music, a Rode VIDEOMIC Mic for house audio, and a podium mic. I took the mix out of this, and ran it into the mic input of the iMac, my primary device. When I was testing, I ran into a bug that only allowed for the first two channels to be mixed when I was going into the computer via FireWire, so I ended up taking the mix out into the computer with 2-1/4″ mono jacks into a 1/8″ stereo jack. This allowed me to do a full eight channel mix (not needed) into the computer.

I created a UStream.tv account, and then started a broadcast on both of the computers. When you start the broadcast, it will ask for access to your camera, which you should grant. You then change the access from your web cam, to the firewire channel, or the DV video. Whichever one shows the camera. From there, you are ready to start the broadcast with a solo camera, and audio through the mixing board.

If you really want to boost our Ustream street cred, then you use two cameras, and CamTwist for graphics. I mentioned earlier that I had two cameras, and two computers for streaming. This is important if you want to switch the video. More about that in a second.

CamTwist is an application that works as an interrupt to the video flow. As such it allows you to add video effects, titles, and is able to not only use your camera, but pull other sources into the mix like your desktop (handy with demos and powerpoints) and movies.

The secret to getting CamTwist to work is having the all of the browser windows shut down, then starting up with CamTwist already running. Once you have enable the broadcast, select CamTwist from the video control menu, and you are ready to go. Before the event, I made title cards, and a watermark that I could leave as overlays through the event. This can really add to your production value.

Lastly, to enable multiple cameras on the same stream, you need to search for the name of the other stream that you are broadcasting, and add it to your stream as a cohost. Then, resize that window to match your other video source. You can then switch between the two sources. In the live events that I have done, I found it useful to have one camera on the powerpoint, and one on the speaker. In the future, I would prefer to have the powerpoint from the speaker, and then just use a laptop streaming that only. Then I could get a cleaner video of that source.

So, that is what I did. Have you done anything like that before?