Free or five bucks, you make the call.
More here.

Is there a revolution underway?

Just got done with the Leaopard install. All said and done, it took about two and a half hours. I was hoping that it might be a little quicker, but not terrible. After watching the Guided Tour, I was a little more excited for the install. It is neat to see the enhancements that were made since I received a beta in August 2006.Here is to the future.

Hope to see you all there!

Some friends of mine have made a great short that has been entered into the Insomnia Film Festival. Take a look and have give them a vote, I would sure appreciate it.

You can find the video here.

Finally. I have been really jealous of the Facebook mobile client that iPhone users have had for sometime now, but this really evens the playing field.

AllFacebook brought the news of the new app earlier today, and I have been really impressed with it.

Finally. I have been really jealous of the Facebook mobile client that iPhone users have had for sometime now, but this really evens the playing field.

AllFacebook brought the news of the new app earlier today, and I have been really impressed with it.

I just read a great post from Richard K. Miller about Apple’s OSX Leopard that is being released Friday, the 26th of October. He says:

I thought my strong interest in the new operating system was justified since Iâ€™m going to take the opportunity to replace my 4Â½ year old Titanium Powerbook with a new Leopard-powered notebook. But then I got thinking, itâ€™s just a tool. Using a Mac isnâ€™t my goal per se. I might as well get exciting about all the tools at Home Depot â€” and I do â€” but if I donâ€™t build anything with them, theyâ€™re useless.

It is an interesting thought. A lot of my fellow students feel the same way about technology. They are known to say things along the lines of, “If I had a better camera, if I had a faster computer,” and so on. I met a bunch of students at Collins College a few months ago, and was really disappointed watching their reels. Many were short, and lacked good content, and when asked why, they responded that they haven’t been involved in that many projects. I couldn’t believe it. Why, if you are at film school, and you have all of the tools in the world, are you not out building a better reel?The problem I think is not knowing the tool.The thought needs to be different. Learn, the tool, and then use the tool.Richard says to:

Use whatever tools work best for you, but use tools to build something.

For everyone but me… For those that don’t know what IMAP is, this probabpy isn’t huge news, but if you have more then one computer, or a mobile device that supports email, this is huge news.
Check out the news here.

It’s true… To protect the kids on the street, here are a few of the telling signs. 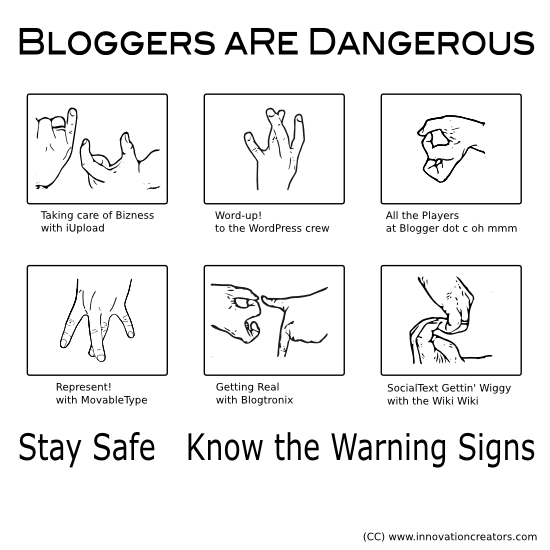 There are some serious common misconceptions about Bloggers within the Enterprise.

Many company executives see bloggers almost as a roving band of gangsters. Forbes wrote about “Attack of the Blogs”.

It is all true. Bloggers even have gang hand signs. Sean Bonner, curator co-owner of the sixspace gallery came up with the original gang sign on September 23, 2005. Boing Boing covered the story, complete with the blog T-shirt war that followed. The poster above gives a more detailed view into the intricate workings of the blogger underworld.

Saw this on Scoble’s Twitter page. Interesting notes on photography, and can really be applied to any passion. This was interesting.

9. Money spent on gear is almost always worth it. Yes, one downside to photography as a lifestyle is that it is ****ing expensive. And the more it begins to live inside you the more you begin to physically NEED that new 14mm ultrawide lens or that Hasselblad that you know you can’t afford but that you know would just look fabulous on you, etc. etc.